Trachycarpus fortunei is Native to southern and central China (Guangdong, Guangxi, Guizhou, Fujian, Hunan, Hubei, Sichuan, Yunnan, Zhejiang), often in mountainous regions growing at altitudes of 100–2,400 m (328–7,874 ft), where the climate is cool and wet in summer, cold and often snowy in winter. 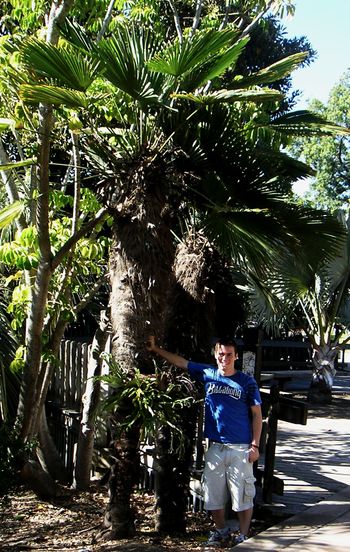 Specimen of 'Wagnerianus', Balboa Park, San Diego, CA.
The exact natural distribution is uncertain due to extensive cultivation for fibre products; some sources suggest it may also be native in southern Japan but it is more likely introduced and naturalised there. Chinese fan palm is native to temperate and subtropical mountainous areas of Asia including southeastern China, Taiwan and the Chusan Islands. It is commonly grown as a landscape specimen in central and northern Florida, the southeastern U.S. Atlantic and Gulf Coasts, and in mild areas along the west coast. It has been sighted in northerly latitudes from Charlotte, North Carolina to Atlanta, Georgia to Vancouver, British Columbia. This picture perfect hardy palm is an internationalist who decorates postcards from Lake Como in Italy, the southern coasts of the British Isles and the Crimean Peninsula. (floridata.com)

Single-trunked, palmate palm to 10 m (rarely 13 m) tall. The trunk is 15 - 30 cm diameter, often with a slightly wider base, and usually remains covered in dense fibre from the leaf bases; rarely this is shed on very old specimens leaving the trunks smooth. Rounded crown of dark green leaves 1-2 m long, with 30-50 leaflets, these 60-80 cm long and 2.5-4 cm wide, arranged in a tight fan at the end of a 60-100 cm petiole. The species is dioecious, with separate male and female trees. The fruit is dark purple-blue when ripe, round, about 1 cm diameter, with a single seed. They are produced on densely branched panicles. Editing by edric.

Trachycarpus fortunei is notable as the hardiest large trunk-forming palm known, with established specimens tolerating winter temperatures below -20°C, and also tolerant of cool summer temperatures in oceanic climates such as Scotland and even the Faroe Islands at 62°N latitude, making it the northernmost palm outdoors anywhere in the world. Some planted in Plovdiv (Bulgaria) are known to have survived a temperature of -27.5°C, the coldest temperature reported to have been survived by any palm. It is tolerant of heavy snow cover. A semi-dwarf cultivar group Wagnerianus has been selected in Japan; it differs in slower growth, with smaller leaves with stiffer leaflets 20-30 cm long, and a trunk just 15 cm diameter. Because of its small size, it is more tolerant of windy sites than normal plants. It has often been treated in popular literature as a separate species - Trachycarpus wagnerianus - but is botanically identical.

Glossary of Palm Terms; Based on the glossary in Dransfield, J., N.W. Uhl, C.B. Asmussen-Lange, W.J. Baker, M.M. Harley & C.E. Lewis. 2008. Genera Palmarum - Evolution and Classification of the Palms. Royal Botanic Gardens, Kew. All images copyright of the artists and photographers (see images for credits). Many Special Thanks to Ed Vaile for his long hours of tireless editing and numerous contributions.