Borneo. A rather rare palm of ridges in the headwaters of the major rivers; 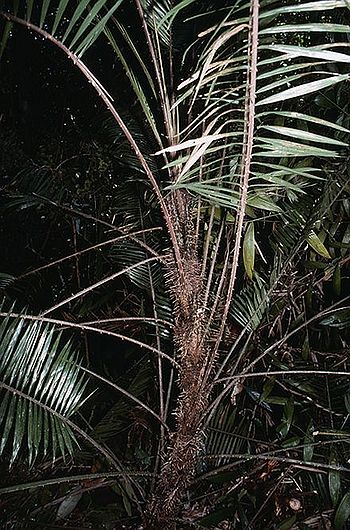 Solitary, short-stemmed, erect rattan, rarely taller than 4 m; stem without sheaths to 10 mm diam., with sheaths to 20 mm diam., internodes 5-10 cm. Sheaths densely covered in fine long black spines to 3 cm, sometimes with straw-coloured tips, mostly in horizontal groups with joined bases, some spines much smaller, bristle-like, and abundant pale brown hairs, the sheaths ending in 2 long, slender, tapering, erect ear-like processes (auricles), one on each side of the petiole, to 20 cm long, 1 cm wide at the base (usually less), ± convex, armed with scattered and grouped spines, the inner surface unarmed. Leaf to 1.2 m, ecirrate; petiole to about 30 cm, about 0.5 cm wide at the base, armed with pale reflexed grapnel spines and scattered black spicules and abundant indumentum, later becoming minutely roughened; rachis neatly curved, armed as the petiole; leaflets up to about 60 on each side of the rachis, very regularly arranged, about 20 × 1 cm, each with a bunch of fine bristles at the base on the undersurface, and abundant soft bristles on both surfaces, the margins with long bristles interlocking with those of the next leaflet; young leaves tinged pink. Inflorescences small and inconspicuous, borne on the leaf sheaths, held erect between the auricles of the subtending leaf, rarely more than 16 cm long, closely adpressed to the sheaths; peduncle very short or absent, the entire inflorescence enclosed within the unarmed or bristly prophyll, splitting along its length to expose the flowers, other bracts very small. Mature fruit ± barrel-shaped, about 17 × 14 mm, beaked, covered in 16-17 vertical rows of dull red-brown, thin, scarcely channelled scales. Seed 8 × 6 × 4 mm; sarcotesta sweet and juicy. Seedling leaf pinnate with about 6 hairy leaflets on each side. (J. Dransfield, The Rattans of Brunei Darussalam. 1997) Editing by edric.

P. divaricatum seems to be a speciality of submontane ridge tops and some facies of kerangas. This is a beautiful rattan with its numerous, fine, soft, bristly leaflets. This species was first described from the Mulu National Park in Sarawak where there seemed to be strong differences between it and P. ursinum, described from the First Division of Sarawak. Now, almost twenty years later, we have a wider range of material from different parts of Sarawak and several collections from Brunei and the rather neat differences between the two species are not so clear cut. It is possible that P. divaricatum, differentiated by its smaller number of leaflets, shorter auricles and larger fruit with a greater number of vertical rows of fruit scales, may prove merely to be a robust form of P. ursinum. The material from Brunei is named here P. divaricatum but it must be admitted that it is more or less intermediate between the type specimen and typical plants of P. ursinum from near Kuching in Sarawak. (J. Dransfield, The Rattans of Brunei Darussalam. 1997)

Etymology: Specific epithet from the Latin; Divaricate, referring to the arrangement of the leaflets in the type specimen.