Hawaii. Grouped around brackish water ponds near sea level to scattered or 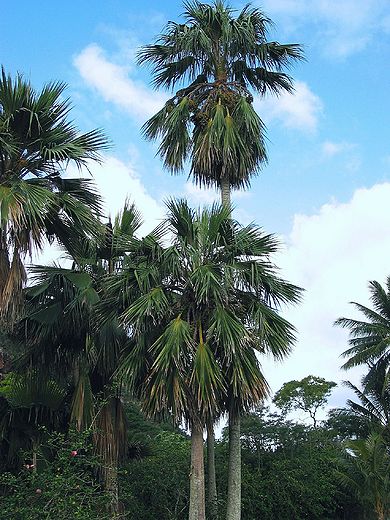 Oʻahu (Cultivated) Seed for these plants collected at the edge of Honaunau Forest Reserve, Kona, Hawaiʻi Island. Photo by Encyclopedia of Life curator Dr. David Eickhoff
grouped in dry to moist forest, Kona, Kau and Puna, Hawaii, to 700 m elevation. The range of Pritchardia maideniana encompasses an area with a long history of intense human activity; thus, it is difficult to determine which individuals or populations, if any, are truly wild and which are remnants of cultivated plants. (Hodel, D. 2007)/Palmweb.

Coastal sites and inland in gulches in dry to moist forests up to about 2,300 feet in Kona, Kaʻū, and Puna, Hawaiʻi Island. At sea level, they are found in groups around brackishwater ponds and even on the beach in sand.

Beccari (1913) based Pritchardia maideniana on two unnumbered collections that. J. Boorman had made from one or two cultivated plants, purportedly of Hawaiian origin, in the Royal Botanic Gardens, Sydney, Australia, and that J. Maiden had forwarded to Beccari in 1911 and 1912 (one is dated 1911 and the other is dated 1912). Because it is more complete, I have selected Boorman's 1912 collection at FI as the lectotype. I have examined photographs of the types at FI, the (or one of the) original living plant(s) growing in the Royal Botanic Gardens in Sydney from which the types were collected, and living plants in Hawaii grown from seeds from the Australian plant, and I can find no differences between Pritchardia maideniana and Pritchardia a(finis. The latter is synonymized here. Pritchardia maideniana is distinguished by its cuneate (diamond-shaped in outline) leaf blades (the result of conspicuous lateral folding, somewhat like that of an accordion) incompletely covered abaxially with lepidia, and inflorescences shorter than or equaling petioles in flower and fruit. It is similar to P. hillebrandii, but the latter differs in the rounder leaf blades with a distinctive and conspicuous glaucous covering. (Hodel, D. 2007)/Palmweb.

Pritchardia maideniana info: Thought to be native to the Big Island along the southern coast. Description: Typically grows to about 30' but can grow twice that. Leaves are rhomboid and fairly stiff and non-droopy. Tends to form a skirt of dead leaves. Leaflets divided to about half the length of the leaf. Flowers are about the length of the petioles. Matures fruits are black, spherical and about 1" in diameter. Culture: probably the most cold hardy of all the Pritchardia and easily the easiest to grow in a Mediterranean climate such as Southern California. Frost damage is minimal in the high 20s, particularly on older plants. Many trees have survived hard, though short freezes in California. Plants there grow up to and a bit over 30' tall. In Califormia they tend to hold only 10- 15 green leaves at a time and one of the least ornamental of the Pritchardia. Plants in the tropics look much more lush and hold over twice as many living leaves. References include Loulu, The Hawaiian Palm, but Don Hodel 2012. (Courtesy Geoff Stein) Editing by Edric.