Known only from a small area at the base of the Serranía del Darién, in the 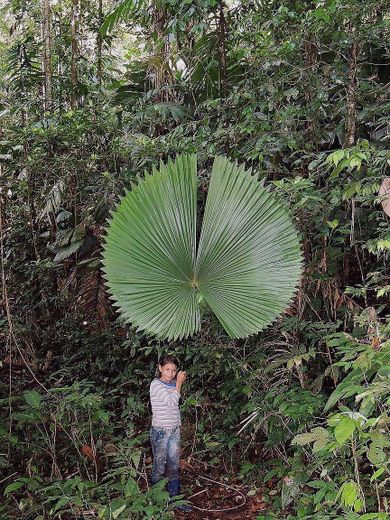 Capurganá, Colombia. Photo by Ibguomeva.
Department of Chocó, northwestern Colombia, between 100 and 250 m elevation. The area lay less than one kilometre away from the Colombia-Panama border, and the species most probably occurs also in that country. The area is covered by premontane moist forest-warm transition (BMh-PM) in Holdridge's life zone system (IGAC 1977), with an average annual rainfall of about 3000 mm. (Galeano, G. and Bernal, R. Sabinaria: a new genus of palms (Cryosophileae, Coryphoideae, Arecaceae) from the Colombia-Panama border. Phytotaxa 144(2): 28 (2013)/Palmweb.

Solitary, unarmed palm. Stem 1-6 m tall, 9-12 cm in diam., light brown, smooth, with inconspicuous leaf scars. Leaves 20-35 in the crown, un-duplicately palmate; sheath + petiole about 319 cm long, sheath basally cleft for about 43 cm, brown-woolly internally; petiole biconvex, rhomboid in transverse section, the margins sharp toward base, green, covered below with a deciduous scaly and light brown tomentum, 2 cm wide at the middle; adaxial hastula tubular, truncate, about 1 cm long; abaxial hastula forming a low rim; blade flat, rigid, sometimes inequilateral at base, 1.4-1.6 m in diam., divided almost to the base into two large halves, these divided to about 1/10th their length into single fold segments, each with 36-42 single-fold segments, these free at the apex for 5-9 cm; basal segments 34-50 cm long, 1.4-1.7 cm wide, bifid at the apex for ca. 5 mm; distal segments 104 cm long, 4.2 cm wide, the free portion with a shoulder on each side just above the adaxial split, bifid at the apex for about 5 mm, the two tips rounded and slightly unequal, glossy above, with numerous cross-veins of two sizes, silvery-whitish below. Inflorescences and infructescences interfoliar, basally erect, the distal half arching laterally, with branches of first order or sometimes the basal branches with a few rachillae; peduncle at least 30 cm long, 1.5 cm wide at apex, sub-cylindrical; prophyll deeply buried among the leaves, at least 31 cm long, 3.5 cm wide, slightly two-keeled, acute and abaxially split at the fibrous apex, yellowish when fresh, covered, especially toward base, with a light brown woolly tomentum; peduncular bracts at least five, about 26-27 cm long, 6 cm wide, chartaceous, persistent, acute at apex, covered with light brown, woolly, more or less persistent tomentum; rachis 46-62 cm long, subcylindrical; rachillae 32-40, each raquilla subtended by a large, persistent, chartaceous, cream-coloured bract with indumentum similar to that of the peduncular bracts, progressively smaller toward the apex, fraying into fibres in fruit; basal bracts 20-22 cm long, about 7 cm wide, middle bracts 13-16 cm long, 5-6 cm wide, apical bracts 4-6 cm long, 0.5-1.5 cm wide; rachillae of the proximal one half with both staminate and pistillate flowers, those of the distal half bearing only staminate flowers; basal rachillae 18-20 cm long, the proximal 1/3 thick, 5-7 mm wide, adaxially flattened and without flowers, abaxially with pistillate flowers separated from each other 1-2 mm, mostly with no anthers and only a few of them with 1-2 anthers, the distal 2/3 of proximal rachillae almost cylindrical, about 3 mm in diam., with staminate flowers spirally arranged all around the rachilla, separated from each other 1-3 mm; middle rachillae 12-14 cm long, the proximal 2 cm similar to the corresponding area of the basal rachillae, otherwise as described for the staminate portion; apical rachillae 3-4 cm long, bearing only staminate flowers and appearing like the staminate portion of basal rachillae. Flowers whitish when fresh, borne on a short pedicel and subtended by a small, narrow triangular bract.

Etymology: The Latin epithet magnifica refers to the strikingly beautiful aspect of the palm.

Uses: The leaves are used casually as umbrellas.

The new palm genus Sabinaria (Cryosophileae, Coryphoideae, Arecaceae) and the new species Sabinaria magnifica from the Colombia-Panama border are described and illustrated. Sabinaria differs from other genera in the tribe in the leaf blades with a single deep, medial, abaxial split, and short abaxial splits in each segment, mostly unisexual flowers with biseriate perianth, calyx connate with the corolla at a single place on its margin, large, tightly appressed, persistent rachis bracts that hide the pistillate flowers, and fruits tightly packed and hidden among leaf bases, often covered by litter.

This incredibly gorgeous palm, only recently discovered, is native to the Columbian / Panamanian border where it lives in shady humidity. Not a whole lot is known of this palm since it was only first described in 2013. We do have seedlings available as of January 2016. They are in one gallons and hve one or two leaves.

Certainly the most exciting and baffling discovery in palms since Tahina spectabilis, Sabinaria magnifica is nothing short of absolutely spectacular and doubtlessly one of the world's most amazing ornamental palms. Its trademarks are a short, straight trunk to 6 m tall that holds an enormous crown of big, stiff, circular, glossy green leaves with a deep central division and pure, bright, silvery white undersides on very long stalks. The short infructescence holds a relatively small number of large fruits that are densely clustered and angled and turn yellow when ripe while remaining clothed in the woven inflorescence bracts. The palm has been discovered and described only in 2013 by a team of Colombian botanists including Gloria Galeano and Rodrigo Bernal, in the densely rainforested border area between Colombia and Panama. Acquiring seeds involved dogged persistence and numerous, strenuous trips by our collectors into this rather dangerous border region and we are extremely proud to be the first ones to introduce this palm to cultivation. It is likely to do well in any humid, tropical climate, protected by at least some tall canopy. (RPS.com)