Cyrtostachys renda is endemic to Borneo, Malaya, Sumatera, and Thailand. This is the 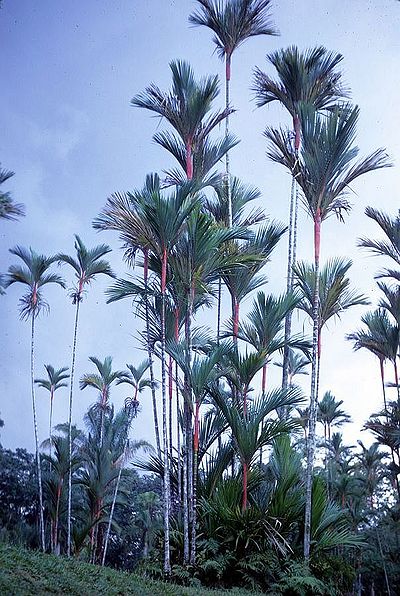 Cyrtostachys renda, differs from all other species in its genus, in the bright red crownshaft and leaf sheath, the lowest number of pinnae (26 – 40 on each side), the pinnae being waxy white abaxially, the inflorescence branched mostly to 2 orders (possibly up to 3), the tectum surface of pollen rugulate, and its preferred habitat in lowland peat swamp forest, in southern Thailand, Malay Peninsula, Sumatra and Borneo. In the protologue of Cyrtostachys renda, no material is cited, although a reference is made to Blume’s account in Rumphia, published some years later, in which the Korthals specimen is mentioned (Blume 1838, 1843). We formally designate this specimen as lectotype. In the case of C. lakka, Beccari (1885) cited two specimens, Beccari PB 2674 and 4038, both of which are extant at FI. Harold E. Moore annotated Beccari PB 2674 (FI) as lectotype in 1956, but to our knowledge did not publish this lectotypification. We have formalised this typification here. The transfer of Cyrtostachys lakka to a synonym of C. renda has already been made by Whitmore (1982). The bright green stems, and brilliant red to orange crownshafts, make Cyrtostachys renda a highly desirable and widely cultivated ornamental. Infraspecific taxa have been described, from cultivation and the number of these could increase in parallel to horticultural demand. Ellison & Ellison (2001) introduced two cultivars, C. renda ‘Apple’ and C. renda ‘Orange Crownshaft’, followed by Waddel (2002) with his C. renda ‘Theodora Buhler’. Before them, Tucker (1992) reported, that in Singapore Botanic Garden grew C. renda ‘Ruby’ and that it was one of the most treasured specimens of all, and he also discussed a strange brown crownshafted form of C. renda in Florida. All the cultivars of C. renda were described based on different stem and crownshaft colours. (Ch.D. Heatubun. 2009)/Palmweb.

Uses: This palm has limited traditional uses; stems are used for flooring and leaves for thatch. It is, however, a highly desirable and widely cultivated ornamental for tropical regions.

Who hasn't lusted after this tropical beauty, with its scarlet crownshaft and petioles, red as sealing wax. Frustratingly, they grow like weeds in South-East Asia, yet are so rarely available elsewhere. The small seeds germinate rapidly and the subsequent seedlings show color from quite a young age. These palms require tropical conditions but will also grow happily in the greenhouse or conservatory. (RPS.com)