Chamaedorea arenbergiana has a wide range and is found in MEXICO, GUATEMALA, HONDURAS, 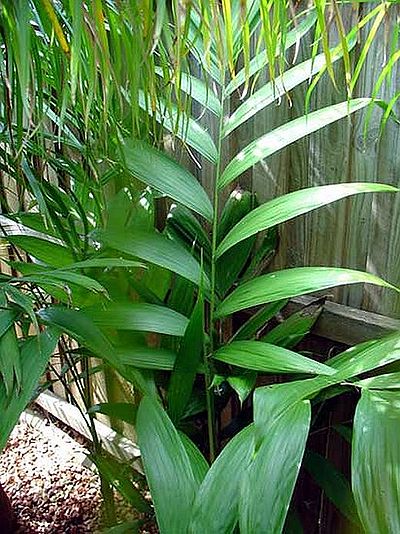 Photo by Colin Wilson
EL SALVADOR, NlCARAGUA, COSTA RICA, PANAMA, and COLOMBIA - in moist or wet forest on both the Atlantic and Pacific slopes at elevations of 100- 1500 m.

Chamaedorea arenbergiana is a faster growing solitary palm, erect to a height of 4 m, sometimes decumbent and flowering when stemless. Stems are 2-3 cm in diameter and are characterized by dark green rings from leaf scars, The infructescence is attractive in a garden setting, and could be compared in appearance to a green corn-on-the-cob. Editing by edric.

Precise identification of collected plants has proven elusive due to the difficulties of preserving the staminate material which is critical for diagnosis in this species. (Hodel)

Chamaedorea arenbergiana can be seen in cultivation, and is sometimes available from specialty nursersies. It is an understory palm. It has no wind tolerance, and needs near full shade when young, with heavily filtered light when mature. It will benefit from consistently moist soil, in a well drained position. It is often grown more than one per container. Probably hardy to near freezing, it would benefit and prefer warmer and milder conditions.

Apparently introduced to Europe in the first half of the 19th century, plants were first described by Wendland from cultivated specimens in the garden of the Duke d'Arenberg-Nieppen in Belgium - hence the epithet.

Chamaedorea is a dioecious genus with male and female flowers occuring on separate plants. The Greek is translated to mean “gift on the ground” - possibly referring to the small stature and pleasant surprise of finding such a gem at your feet.