Trithrinax brasiliensis is found in the Atlantic rainforest of Brazil; Southeast. 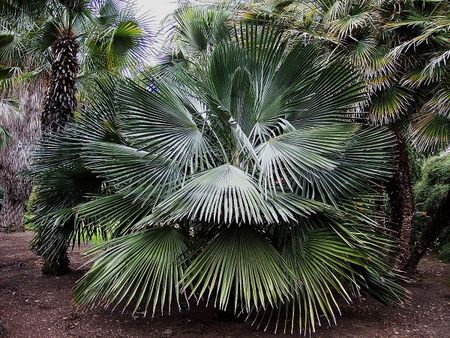 California. Photo by Geoff Stein.
Open forest at between 700 m and 1000 m altitude along the southernmost end of the mountain range in Rio Grande do Sul, Brazil.

"Trithrinax acanthacoma is growing in much colder places here in Brazil and is a larger palm, with smaller seeds. The trunk is armed with spines and the leaves have spines on the tips, but each individual lealflet is only split slightly at the end. Trithrinax brasiliensis is growing further south in Rio Grande do Sul and into Uruguay. It is a slightly smaller plant but seems to have a larger seed. It is slower growing, I cant say if its more or less cold hardy, but likelihood is slightly less hardy. The trunk has weak spines at the apex but these soon disintigrate leaving a trunk without spines. The leaf is very different, being much deeper divided, and much more glaucous. Each leaflet is very deeply divided also (whereas acanthacoma is only divided to a few cms maximum) and the tips of the leaves are far less dangerous." Editing by edric.

Rare Trithrinax from south brasil. Often confused with Trithrinax acanthacoma it is easily recognised by its white inflorescence (as opposed to yellow), deeply divided leaflets, slight blue leaf colour, and feeble spines that only appear at apex of trunk and quickly disintegrate.

"Small to medium sized, solitary palmate palm, with an unusual woven fibre wrapping the trunk, fibre falls away very easily to reveal a finely detailed pattern of old leaf bases. Leaves are greyish green, very deeply divided, with each individual leaflet being split into two long thin "fingers". The spines are only found at the apex, and due to their feeble nature tend to fall away very quickly. It grows large bunches of white/pale green oval fruits about 1.5 cm long, the seeds being the largest of the genus." (Nigel Kembrey)

"Trithrinax grows well for me in Augusta, Ga., but needs to be fertilized carefully. It can suffer from Boron deficiency, so watch for the central growth area starting to grow sideways and for leaves that become small and distorted." (J. Levert)

Conservation: The palm is threatened by forest clearance,fires and cattle grazing.

Trithrinax brasiliensis is known as "carandá", "burití" or "leque". It is considered a rare and endemic species that occurs in Argentina, and southern Brazil. Subpopulations in Paraná are under considerable threat but the status of subpopulations in Rio Grande do Sul and Santa Catarina is not known. Nowadays it is considered a threatened species belonging to the category "In Danger" in the List of Threatened species of Rio Grande do Sul state, southern Brazil.