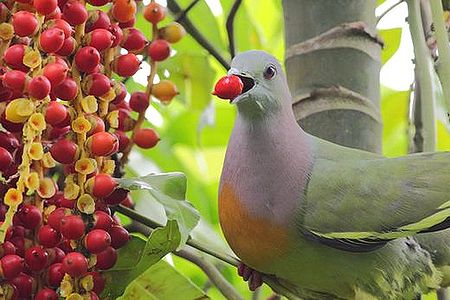 Stems grow in dense clumps or rarely solitary, up to 7 m tall, only 7 cm in diameter, thus appearing bamboo-like. Leaves are up to 2 m long or more, compound. Leaflets are 23-28 on each side, more or less regularly arranged, with margins nearly parallel or tapered at the tip. Inflorescence are up to 60 cm wide. Male flowers are 6-8 mm long, with 26-40 stamens. Fruit is red, ovoid, 12-16 mm long. Seeds are deeply 3-6-grooved. (Dr.s Kenneth Greby, Yazdy Palia, Satish Pardeshi.) Editing by edric.

Stems: Clustering, each stem with 8-10 leaves, slender, light gray stems to 8 m tall and up to 3-10 cm in diameter, with widely spaced, ridged leaf scar rings. Leaves: Pinnate, reduplicate, 1-2 m long, with a slightly arching rachis holding drooping, regularly arranged leaflets in a single plane. The crown shaft is about 50-60 cm long, somewhat swollen at the base, and light green with a waxy white coating. Leaflets are green above and below, widest toward the middle or wedge-shaped, prominent midribs with brown or tan twisted ramenta on the underside. Leaflet tips are truncated and jagged (praemorse). Flowers and fruits: Inflorescence is pendulous, to 60 cm long and with yellowish branches. White male and female flowers are borne on the same inflorescence. The ovoid, red fruits are 1-1.5 cm long and have remnants of the stigma at the apex. (lucidcentral.org)

Macarthur Palm has stems cespitose (Growing in tufts or clumps) or rarely solitary, to 7 m high, 7 cm in diameter with leaves to 2 m long or more. The pinnae is 23-28 on each side, more or less regularly arranged, obliquely praemorse, with margins nearly parallel or tapered apically. Flowering is seasonal and begins in October or November but can be earlier and later depending on conditions and plant health. Inflorescence is up to 60 cm wide with staminate flowers 6-8 mm long and 26-40 stamens. The brilliant red fruit begin to ripen in January mostly, appearing until April. The fruit is red, ovoid, 12-16 mm long with seeds deeply (3-) 6-grooved with homogeneous endosperm. (Essig, F.B. 1978. A Revision of the Genus Ptychosperma Labill, Arecaceae.

Conservation assessment: In the NT, this species is classified as Endangered; Fire and feral animals have been the primary threats impinging on the populations in the 1990s (Liddle et al. 1992ab, 1996, 2001, 2006). There was substantial mortality following wildfires at the Whitewood Road population in 1990 and 1993, and at Black Creek in 1992. In a 1990 survey, Whitewood Road contained 42% of the known adults, however this was reduced to 5% by 2000-2001. Re-survey of Bankers Jungle in 2003 showed significant impacts from grazing with the loss of juvenile and adult plants. Disturbance from feral buffalo, cattle and pigs declined in the 1990s following on from the Brucellosis and Tuberculosis Eradication Campaign, and changes in land use and fencing of four of the eight populations. In the early 1990s, several populations exhibited a polarised size class structure typified by large adult and juvenile plants. In the absence of wildfire and in a period of reduced disturbance by feral animals, sufficient small juvenile plants survived and grew to infill the intermediate classes. In addition to the above, there are increasing threats from: • changed fire regimes due to increased fuel loads from introduced grasses around rainforest margins; • changed land use in the catchment that could lead to a reduction in the water supply to the springs on which the rainforests depend; • changes in surface water quantity and quality; • clearing proposals and any other action that could remove or damage individual rainforest patches that form an interconnected mosaic essential for the flow of genetic material; and • hybridization with introduced Ptychosperma species. (Northern Territory Government)

Special thanks to Geoff Stein, (Palmbob) for his hundreds of photos

Special thanks to Palmweb.org, Dr. John Dransfield, Dr. Bill Baker & team, for their volumes of information and photos