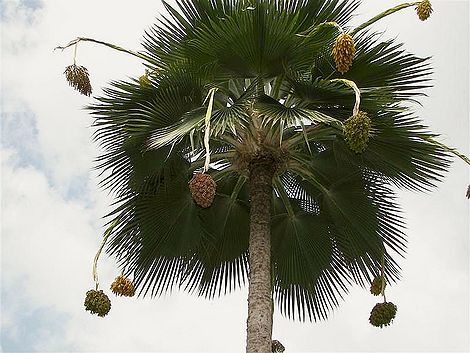 This palm comes from the Lau Group in eastern Fiji. In habitat it grows in Limestone soils.

The lepidia on the abaxial leaf blade surface, conspicuously arranged in distinct, parallel lines, are diagnostic for Pritchardia thurstonii. It is rather widely cultivated in tropical gardens. On Vulaga and Ogea Driki in the Lau Group of Fiji, Pritchardia thurstonii is restricted, in rather spectacular fashion, to the tops of small, mushroom-shaped, karst limestone islets in their lagoons, nearly to the exclusion of all other woody vegetation (Fuller 1997, Fuller & Jones 1999, Watling 2005). On Eua island in Tonga, it is confined to the rock escarpment 200-300 m high on the southeast coast. There it occurs from the lip or crest near the top of the escarpment, sometimes with serpentine trunks, down to the sea coast. At the base of the escarpment, near and at the sea, is a jumble of gigantic, limestone boulders, some as much as 10-15 m in diameter, amongst and on top of which grow P. thurstonii. There is no barrier reef at this point, and waves crashing on the rocks at times envelope the surrounding area, including the palms, in a salt-laden haze. Because Mueller and Drude did not designate a holotype from the original material, Moore selected a lectotype at MEL and an isolectotype at Kas the type material for this species (Moore 1979). Several workers (Lister 1893, Burkill 1901, Beccari & Rock 1921, Watling 2005) have erroneously referred to Tongan material of Pritchardia thurstonii as P. pacifica. likewise, herbarium specimens of P. thurstonii from Tonga are frequently misidentified as P. pacifica. (Hodel, D. 2007)/Palmweb.

In culture the P. thurstonii likes full sun, and moist soil. Wind and salt tolerant. It's hardiness is USDA Zone 10b - at around 35°F or 1.7°c.

"This palm is hard for me to distinguish from Pritchardia pacifica, also from Fiji, as it has similarly large, flat, finely pleated stiff leaves of incredible beauty... supposedly used frequently as avenue plant in Hawaii (wouldn't know which are which, though). Also similarly tolerant of salt water. The primary differences, that have been pointed out to me, are 1) this palm's flowers extend far beyond the leaves and look like ornaments hanging down from the crowns... while flowers of P. pacifica are still nestled within the leaves... and 2) this palm is a bit smaller in leaf size, and a tad less 'perfect' in the size/shape of the leaf." (Geoff Stein)