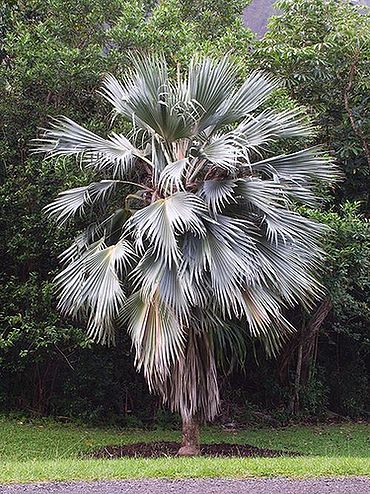 Pritchardia hillebrandii is distinctive in its conspicuously waxy glaucous leaf blades more or less devoid of lepidia, inflorescences shorter than or equaling the petioles, and small fruits. Leaf blades can be so heavily glaucous that they appear nearly white. It is similar to P. maideniana but the latter differs in its diamond-shaped (in outline) leaf blades (the result of strong and conspicuous folding) that mostly lack the giaucous covering. It is unclear whether Hillebrand's type material originated from cultivated plants in Honolulu or from wild or cuitivated plants on Molokai. Beccari (1890) noted that much confusion surrounded the provenance and labels on Hillebrand's specimens at B, although there is a loose note in the photograph at FI of the type at B with the name Molokai handwritten on it. It is also unclear whether the numbers identifying the syntypes of P. insignis (7970 and 8800) were applied by the Botanic Garden in Guyana or its herbarium or by the Berlin Herbarium. (Hodel, D. 2007)/Palmweb.

"P. hillebrandii is a medium sized palm with trunks that grow to 25 feet. The fan shaped leaves’ lower surfaces are ashy-silvery along the petioles and ridges of segment folds. They are waxy glaucous, sometimes to the point of appearing silvery as in the case of a specimen growing in the Ho’omaluhia Botanical Garden on Oahu. The fruit are small yellowish or reddish brown globose shaped becoming intensely bluish or nearly black when ripe. They are 3/4 inch in diameter, sometimes a little larger but less than 1 inch.

Etymology: Pritchardia name is dedicated to William Thomas Pritchard (1829-1907), British official stationed in Fiji in the 19th Century, British counsul in Fiji, adventurer, and author of Polynesian Reminiscences in 1866.

Pritchardia hillebrandii is variable in overall appearance, common var. with green leaves, ranging to the "blue dwarf" which has, according to specimen, more or less waxy glaucous leaves on both sides. The "blue dwarf" is regarded as especially attractive. Rock (1921) described a 'robust' variety with very large leaves, being cultivated near Kamalo on Molokai, but commented that the size of the palm may be due to soil conditions. {Wagner, W.L., Herbst, D.R. & Sohmer, S.H. 1990)