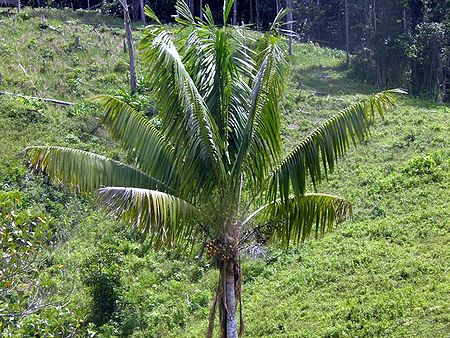 Port Barton, Palawan, Philipines. Photo by Ivan.
the coast of Sabah. Moore (1965) mentioned the presence of this species in mainland Sabah itself - somewhere near Marudi Bay - unfortunately no herbarium specimens are known to exist and the record thus is based on Moore's observation. This species has never been seen in other parts of Borneo. Lowland tropical rainforest. (A.P. Keim and J. Dransfield. 2012)/Palmweb.

One specimen (Podzorski 765) has inflorescence branching to 3 orders; however, the rest of the characters match the description of Orania paraguanensis - including the pinnate eophyll. Prior to this study O. paraguanensis was only known from Palawan. It is now known to occur on Banguey Island (now Banggi Island) just off the coast of Sabah and presumably in Sabah itself - somewhere near Marudi (present day Marudi) Bay (Moore 1965). So now there are two species found in Borneo, O. paraguanensis and O. sylvicola. (A.P. Keim and J. Dransfield. 2012)/Palmweb.

Conservation: Critically endangered (CR B2a, b). The palm is known from just three localities in Palawan and one in Sabah. We know nothing of its status in Sabah. In Palawan the forest where it grows is subject to intense pressure from mining and land clearance. (A.P. Keim and J. Dransfield. 2012)/Palmweb.

A.P. Keim and J. Dransfield. 2012. A monograph of the genus Orania (Arecaceae: Oranieae).