Endemic to northeast Madagascar where it occurs between Ampasimanolotra and Masoala Peninsula. 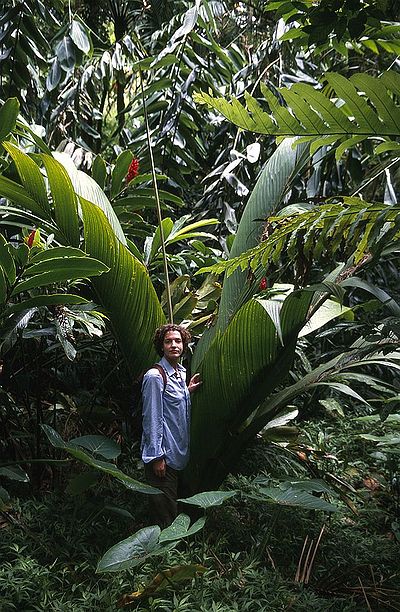 Lyon Arboretum, Hawaii. Photo by Dr. William J. Baker, Royal Botanic Gardens, Kew/Palmweb.
Remote upland swamp in valley bottom; 400-450 m. The population of this species is small as only about 80 mature trees in total are estimated across the five sites where it occurs. The population is probably decreasing.

"These palms definitely do best in a shaded, or at least partly shaded, area when they are smaller. As they get larger they can take a fair amount of sun even though they will probably always look their best in partial shade - no matter what size. The more rain they get, the better they will look and the better they will grow. So, it's important to plant them under canopy that will allow the rain to come straight through. Or in a little clearing where they get shade from taller palms/trees most of the day, but where the rain can fall straight onto them. I've planted a bunch of these, because they really like it here. Initially planted five of them in July 1996, from 1G and 2G pots. They were all less than 2 ft tall at the time. Lost one of them in July 2003 after a period of dry and hot weather. That individual was the one (of the initial five) that was most exposed to full sun. It was about 10 ft tall at the time. All the other four continue to grow and thrive, and after the initial five I've planted quite a few additional ones. Here are two different groups. The first one is underneath a large (native) Tetraplasandra hawaiensis trees, and those palms are probably marginally better looking than the second group, which is a bit more exposed to sun." (Bo-Göran)

Ever since its discovery in 1983 this has been one of the most sought-after of all Madagascar palms. Tales of the presence of a huge entire-leafed palm growing in the hills near Maroantsetra began circulating in the early 1980s, and through dogged persistence Californian palm enthusiast Mardy Darian, with the help of Jean Gerard and Dominique Halleux, tracked it down. JD can remember the excited phone calls from Mardy Darian describing it. The first description that appeared in Principes (Dransfield & Uhl 1984a) was based on fragments and photographs, sent by Mardy Darian. These could not prepare one for the sheer size and beauty of the palm as it grows in a small peat swamp in the hills above Sahavary.