Endemic to New Caledonia. Kentiopsis pyriformis, ranges from along the east coast of New 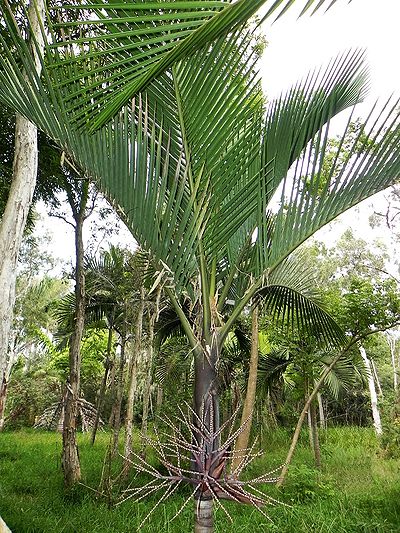 New Caledonia. Photo by Ben.
Caledonia south of Yaté, where it occurs in a fringe of forest 20 km. long, and 100-500 m. wide, from Touaourou to Goro villages at 5-100 m. elevation, inland to the southwest about 11.5 air kilometers distant, in remnant patches of forest at about 200 m. elevation, at the southern end of Monts Nengone, near Port Boisé. The main population is at Goro on a steep, unstable, rocky slope, above the mouth of Kuebini River. (J.-C. Pintaud 1998)

Ecology: A more or less gregarious subcanopy to canopy species, Kentiopsis pyriformis is found in lowland rain forest, on ultramafic rocks, both on oxydic colluvium on flat land, and steep, rocky, eroded slopes of peridotitic mountains and hills. The largest and more gregarious population at the Kuebini River near Goro, grows with other palms including Actinokentia divaricata, Basselinia pancheri, Clinosperma bracteale, and Cyphokentia macrostachya. The population near Port Boisé is much smaller, and the individuals more scattered. Associated palms there include A. divaricata, B. gracilis, B. pancheri, and Chambeyronia nmacrocarpa. (J.-C. Pintaud 1998)/Palmweb.

Conservation: Status is critically endangered (proposed). Occupying less than 2 ha, the main population of K. pyriformis at the Kuebini River is unprotected and consists of less than a hundred trunked individuals. Fire severely affected the entire population about 1980, destroying nearly all saplings and damaging trunks of many mature individuals. Despite an abundant and regular production of readily germinating seeds, regeneration remains extremely low due to the difficulty of seedling establishment in an unusually steep, rocky, unstable habitat. In March 1996, Cyclone Beti caused the fall of at least 25% of the adults, nearly all of them more windprone since the earlier fire destroyed protective vegetation and damaged trunks. In one group of eight adults, the cyclone felled seven of them.

Pintaud, J.-C.-1998. A Revision of Kentiopsis, a Genus Endemic to New Caledonia. Principes 42(1) 32-33, 41-53. Many Special Thanks to Ed Vaile for his long hours of tireless editing and numerous contributions.