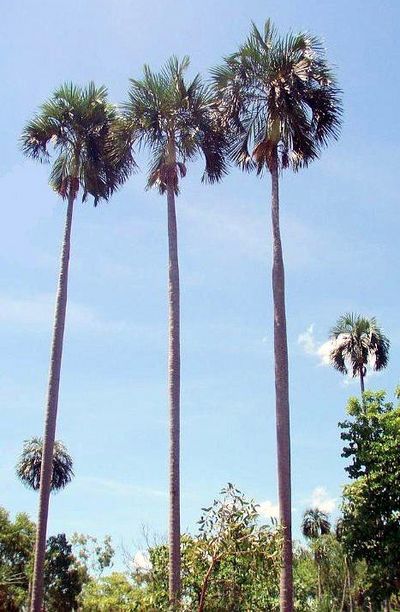 Distribution:—The central northern portion of Australia’s Northern Territory including the Cobourg Peninsula and Melville Island. Also reported from the north eastern portion of the territory (Dowe 2010).

Domesticating this species has proved slow, mainly due to the horrendous germination rate, 1% being usual, and this after waiting 12 months or more. Seed is planted in deep trays, as long brittle roots are formed. When finally the first strap leaf appears, extra care is needed moving them into pots, using one big enough to accommodate two years growth. Lightly fertilize and keep damp until 4 to 6 stiff bifid leaves are produced. Then they are planted out in dappled shade, as further growth seems unlikely, After gaining only 1 or 2 leaves in their first year they accelerate into more than normal growth rates, producing longer, pinnate, arching leaves. Plentiful water, good drainage and light fertilizing are necessary. (Palms & Cycads). Cold Hardiness Zone: 10b

"Firstly let me explain something. Hydriastele ramsayi grows in one of the most inhospitable hot climates on earth and trying to germinate seed has proven to be almost impossible out of it's own backyard. If you do have a plant, your chances of growing one succesfully would or should normally prove to be very difficult indeed, one would have to emulate the same type of environment, same soil, same heat, same humidity when needed. So what has our newest bestest honorary ratpack friend Craig from near Noosa done ? Well ladies and gees, he has done just that, he is growing one of these beauties so well, you'd think we were in Kakadu national park." (Walter John Donovan), see photos "Craig's palm" below.

"This is a majestic palm that grows in open woodland under extreme heat conditions. When we were there, we measured the temperature and humidity with a highly accurate electronic scientific thermometer. At the time it was 39°C (102°F) with 40% relative humidity ...stifling temperatures. Everything was hot to the touch, and the ground temperature was way in excess of 50°C (120°F). The wet season is still another month away, so the landscape is not as green as it can be, but some recent showers have taken away the scorched look. These palms were growing in almost pure sand, and could be found in all stages of development, from seedlings, through to young plants, juveniles and age-old monsters. Anyway, here are a few photos to give you a better idea of the growing conditions and the natural beauty of these palms." (Daryl O'Connor)