Dictyosperma album is endemic to the Mascarene archipelago, Mauritius, Rodrigues, 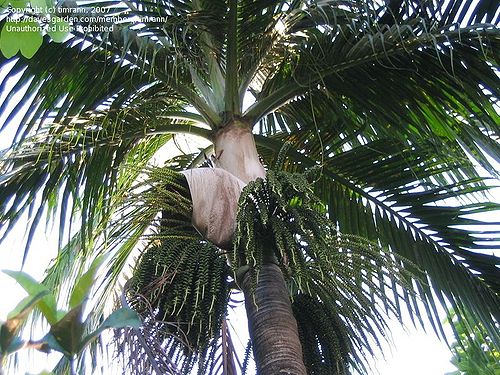 La Réunion. Can be found growing, from sea level to an altitude of 2,000 feet. Living in the coastal forests of the Mascarenes, they experience warm temperatures, high humidity and regular rainfall. Dictyosperma album is found in tropical areas. It is nearly extinct in habitat, because of wholesale conversion to farmland.

Dictyosperma album is a medium-sized palm, generally reaching about 12 meters (37 feet) in height. A solitary, pinnate, monoecious (male and female flowers on the same inflorescence) palm, that develops a somewhat swollen crownshaft. The crownshafts range from green to grey to brown. The trunks have swollen bases, and the inflorescence looks like a horse tail, or rooster tail. The most distinguishing feature, is that the newly emergent leaves stand as vertical spears. In habitat, these palms can grow 40 feet tall. The ringed trunks are solitary at 15 cm. in diameter with a slight bulge at the base. The crownshaft is over a meter tall, swollen at the base, and covered in white wax— which has given the palm its epithet, album and small, matted brown hairs, producing a rounded leaf crown 4.5 m. wide and 3 m. tall. The 2.5 to 3 m. leaves are borne on short 30 cm. petioles; the arching leaflets are pointed at the apice, from 60 – 90 cm., dark green in color, and emerge from the rachis in a single plane. On flowering, they produce up to six inflorescences which ring the trunk below the crownshaft, branched to one order, with white to yellow flowers, which are male and female; both pistillate and staminate flowers have three sepals and three petals, the former being smaller than the latter. The ovoid fruit ripen to purple or black in color, containing one brown, ellipsoidal seed. Its small fruit is inedible. It is called the hurricane palm because it can suffer strong winds (usually) without being destroyed. This is quite a variable palm and propagation is by seed. Editing by edric. (Smithsonian Tropical Institute) Editing by edric.

These palms grow well in South Florida. They are not prone to micro-nutritional deficiencies. They have come through Category 1 hurricanes without damage. Since 1994, I have never observed any cold damage, but in the 1989 freeze palms at Fairchild Tropical Botanic Garden were 95 percent burned but later recovered. They are only moderately susceptible to lethal yellowing. There are three varieties commonly available in South Florida. All are salt tolerant and are best planted in full sun.

In tropical or semitropical climates such as Brisbane, Durban, Miami, Singapore or Honolulu (or in a warm, humid greenhouse anywhere), these are among the fastest-growing palms. They are also called Hurricane Palms because damage from storms that wreck other plants is repaired near-overnight by the palms' rapid natural growth rate.

They are tender to freezing cold, with qualifications. A brief freeze in Miami, or southeastern Brazil, for example, will cause damage, but, usually, not death, when the freeze is immediately followed by warm, humid weather. Dictyosperma are much less tolerant of the long, cool spells (nights under 50 F) that characterize winters in Mediterranean climates like Southern California, Western Australia or southwestern South Africa. In such places, they "spot out" (turn yellow with brown spots) and stop growing until warm weather comes again in spring. Likewise, they also perish quickly in true desert areas or as newly-planted specimens in "reverse dry desert winds" in warm temperate climates, such as the Santa Anas in California, or the Scirocco in southern Europe.

One possible trick for raising these palms in a warm temperate climate (the warmer the better) is to plant them among other leafy plants, like flowering gingers, bananas, or bamboo, which raise the ambient humidity and create a more-favorable microclimate. Dictyosperma album var. rubrum is possibly more tolerant to dry Mediterranean climates and has been seen growing perfectly in inland San Diego in half day sun. A nice specimen also grows in La Habra, California, about 20 miles from the sea.

A tall growing, attractive palm with a prominent, pale crownshaft and swollen trunk base. With its elegant, feather-shaped leaves, it makes an attractive pot plant when young. It grows fast given a sunny position and adequate water and feed, and will succeed in tropical, subtropical, and some warm temperate areas. The Hurricane Palm can also take considerable coastal exposure. (RPS.com), edric.