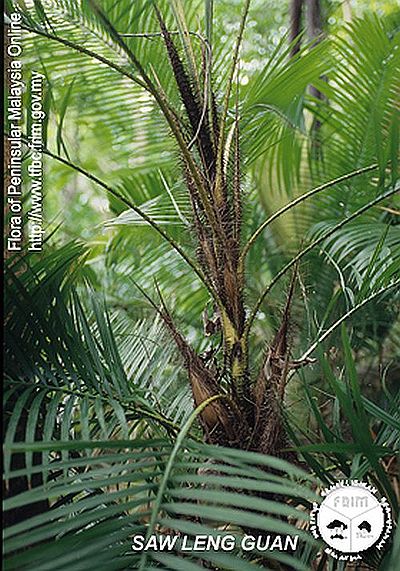 Clustering moderately robust high climbing rattan palm, producing dense thickets, ultimately climbing to 30 m. Stem without sheaths to about 2 cm in diameter, with sheaths to about 3.5 cm; internodes about 30 cm long. Sheaths dull brownish green, very densely armed with slender black horizontal or slightly erect spines to 3.5 cm long and abundant chocolate-coloured indumentum. Knee conspicuous. Ocrea poorly developed. Whole leaf to about 3 m long including petiole to 30 cm long and cirrus to about 1.25 m. Petiole densely armed with black spines along underside and edges, and rather sparsely armed on the upper surface. Leaflets up to about 80 on each side of the rachis, regular, narrow and crowded to about 45 cm long by 1.5 cm wide, armed with bristles on three nerves above, along margins and on mid-nerve on under surface. Inflorescence to 35 cm long by 12 cm wide sessile, erect, with beak to about 10 cm all inner bracts included within the outermost; outermost bract densely armed with narrow black spines to 4 cm long, usually less. Ripe fruit rounded, about 1-7 cm diameter covered in 18-21 vertical rows of dull cinnamon-brown reflexed scales. Seed rounded, somewhat angular; endosperm deeply ruminate. Seedling leaf with about 8 crowded pinnae. (J. Dransfield. 1979)/Palmweb. Editing by edric.

D. melanochaetes is found principally on dry ground near the coast, sometimes forming thickets in seashore forest. This rattan is very closely related to D. angustifolia and is possibly not distinct. It can be distinguished by the much finer and denser black spines on the leaf sheath and outermost bract of the inflorescence and the chocolate-coloured rather than reddish-brown indumentum. Ecologically it is possibly distinct being found on dry ground near the sea rather than on river banks and swamp margins. (J. Dransfield. 1979)/Palmweb.