Daemonorops didymophylla is found in Borneo, Malaya, Sumatera, and Thailand. 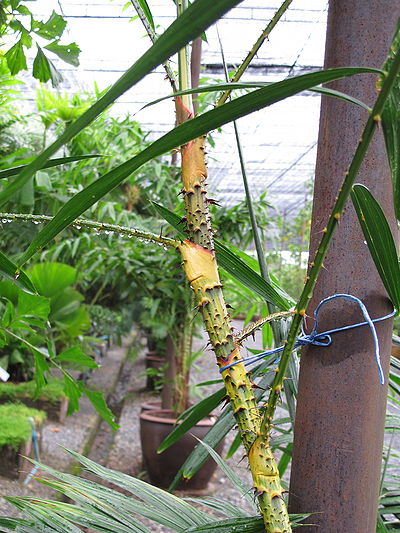 Moderate clustering rattan palm, rarely more than 15 m tall, often fertile when only 3 m tall; stem without sheaths about 12 mm in diam., with sheaths to 30 mm in diam., internodes to 15 cm long. Sheaths dark green, armed with scattered, somewhat reflexed, variable, grey to black triangular spines, 4-25 mm long with yellow bases; knee prominent. Leaf cirrate to about 2.5 m including the petiole to 40 cm long and cirrus to 1 m long; petiole usually ± rounded in cross section, armed with sparse spines on the yellowish lower surface and rather dense groups of short spines on the dark green upper surface; leaflets to about 20 on each side of the rachis, usually arranged in divergent opposite or alternate pairs but sometimes arranged ± regularly in the proximal portion and paired in the distal portion only, or subregularly throughout, the leaflets usually rather broad, to 35 × 3.5 cm, rarely narrow lanceolate 40 × 2 cm, bristly along the margins, otherwise unarmed. Inflorescence to 20 cm, rarely to 50 cm, with all but the first bract quickly falling at anthesis; peduncle and first bract densely armed with partial whorls of short triangular spines to 5 mm; partial inflorescences up to about 5. often 1 or 2 only; rachillae and flowers covered in red-brown indumentum. Ripe fruit ovoid to 25 × 20 mm, covered in 12-15 vertical rows of rather swollen red-brown scales densely covered with dragon’s blood. Seed ovoid with slight flattening; endosperm deeply ruminate. Seedling leaf with 4-6 broad leaflets. (Fig. 11, Pl. 7A). (J. Dransfield. 1997)/Palmweb. Editing by edric.

D. didymophylla is found at altitudes up to 1000 m above sea level, tending to favour lower hill slopes and valley bottoms, being most characteristic of the bottoms of small valleys in hill dipterocarp forest. It is not found in swamp forest or kerangas. For differences between this species and D. maculata see under the latter. Apart from possible confusion with D. maculata, D. didymophylla is usually easily identified but the presence of forms with subregular leaflets is likely to cause confusion. However, the leaf sheath armature coupled with the cirrate leaf and petiole rounded in cross section are fairly consistent. (J. Dransfield. 1997)/Palmweb.