Basselinia moorei is only known from the upper slopes of Mont Panié, above 900 m elevation on the eastern side, 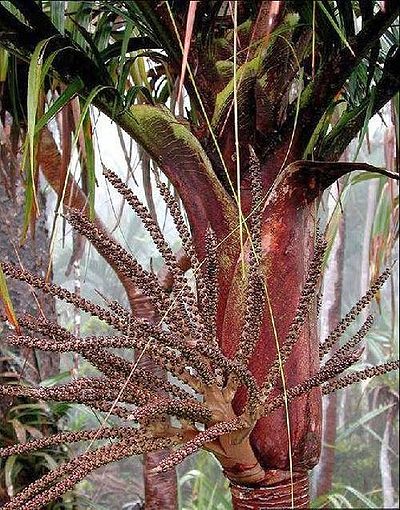 Notes. – This species has been overlooked and confused with the co-occurring Basselinia velutina. However, there is very limited overlap of the two species on Mont Panié, since B. moorei replaces B. velutina above 900 m elevation. The two species are nevertheless conspicuously different in the abundance and disposition of ramenta on the abaxial side of pinnae, in inflorescence architecture and fruit color, among other characters. Several morphological features shared by B. moorei and B. sordida, including the peculiar, flattened articulation that connects the filament to the anther, the pedicellate pistillate flower, and stigmas with short papillae, rather suggests a sister relationship of these two species, that would be edaphic vicariants within the New Caledonian cloud forests. (Basselinia moorei, Pintaud & F.W. Stauffer 2011).

In cultivation it would be best suited to even, warm temperate climates.

This sensational palm has lead a strangely secret life, considering that it grows at high altitude in northeastern New Caledonia in a place that has been visited by many botanists and plant enthusiasts and has still managed to escape recognition, perhaps on account of being confused with Basselinia velutina, which is easily done when not seen in fruit. It has only been scientifically described in 2011 as a new species honoring Harold Moore and his enormous contributions to the taxonomy of New Caledonia palms. It is found only in cloud forests on the upper slopes of Mont Panié, above 900 m on the eastern side, and above 1400 m on the western side, and reaches close to the summit at just above 1600 m. It grows a slender trunk which holds a thick, reddish brown crownshaft that is not completely closed and has large lobes, reminiscent of Burretiokentia rather than Basselinia. The round fruits are bright orange red at maturity as opposed to other Basselinia fruits which mature to black. (rarepalmseeds.com)