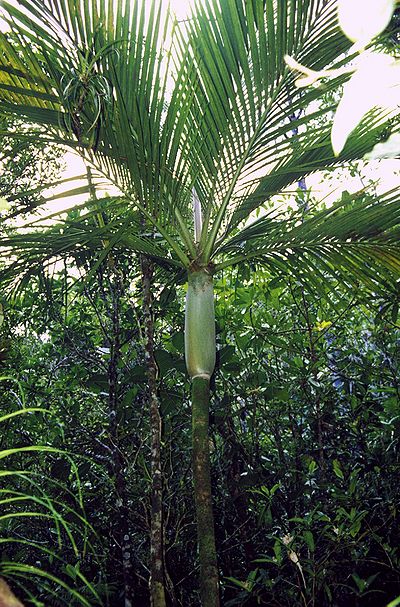 Solitary palm up to 10 to 15 m high, stout trunk flare at the base with a diam. from 15 to 18 cm, covered with leaf scars somewhat prominent, separated by internodes of 8 cm. Trunk type: Crownshaft, Inflorescence: Flower emerges below crownshaft, Infructescence: Fruit when ripe, has the appearance of black olives. Even though it has the reputation of being one of the easiest of the Basselinia to grow, this lovely palm is by no means commonly encountered even in enthusiasts collections. In its native home New Caledonia it is found only in one location in tropical rainforest in the northeast of the island between 300 and 500 m (1000 and 1600 ft.) elevation. Basselinia favieri forms a slender, smooth, brown trunk to about 10 m (33 ft.) tall that holds a fairly dense crown of 8 to 10 spreading, regularly pinnate, slightly keeled leaves on short stalks. The leafbases form a slender green or yellowish green crownshaft with a grayish tinge. The spectacular and rather large, spreading inflorescences hold numerous long flowering branches that are thickly covered in dense, felt-like, pale pinkish hairs. In dense humid forest (F) substratum On ground more or less profound vulcano-sedimentary substrate. sheet Leaves 8 to 10, spread of 2.5 to 3.5 m long, regularly pinnate with a 35 cm petiole covered with brown patches slightly; sheath large, 1 to 1.5 m tubular yellow-green and scaly gray outside, yellowish within. Phenology (flower) An inflorescence arising under the leaves, large, spread and radiant, 1.3 x 1.75 m, with branches covered with a tomentum divariquées thick whitish or greyish. fruits Fruit globose, 8-10 mm diam., Red when ripe, with the stigmatic residue, deported to the upper third. Editing by edric. (From the French).

Special note: All information, translated from the French, edric.

Special thanks to Geoff Stein, (Palmbob) for his hundreds of photos, edric.

Special thanks to Palmweb.org, Dr. John Dransfield, Dr. Bill Baker & team, for their volumes of information and photos, edric.