Northwestern Brazil. Found in the States of Amazonas and Roraima. 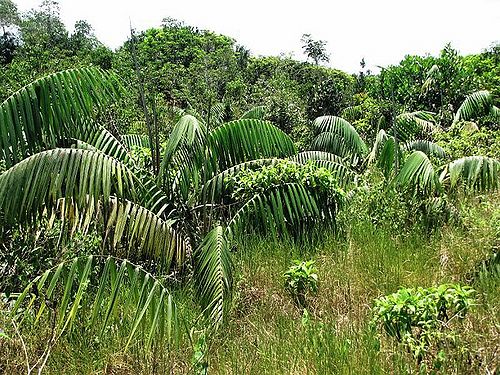 Uses: Used by the Brazilian peoples in construction, and for various thatched goods.

"The Barcella odora palm is found in Campina forest. These areas are found throughout the region and have low and open vegetation on poor sandy soils. There are a lot of these areas along the Negro River basin. This area is an area of tributaries of the Negro. The large amount of sand found in the region is from the wasting of the Guyana higlands mountains. About 100 meters from this spot the primary forest starts." (Don Kittleson)

Barcella odora in Roraima: For those who know the taxonomy of palms, this news is absolutely spectacular! The news is published on the site notae Plantarum , describing this fact. The tree was found in the transition zone between the Amazon forest and the cerrado, in the state of Roraima in the year 2006. Barcella odora is a small palm tree which had hitherto only been found in the vicinity of the town of Barcelos, the upper Rio Negro, State of Amazonas. Incidentally, how can notice, the genus name " Barcella "is a tribute to the town of Barcelos, where the plant was first found in mid-1875 by the English researcher James Trail. Trail originally named the species as Elaeis odora wrongly classifying it within the group that owns our name "Palm", whose scientific name is Elaeis guineensis . Later another researcher, Drude, created the genre Barcella , transferring to the same species. Until today the genre is monospecific, ie, contains a single species. So far Barcella odora had only been found in the upper Rio Negro, in place of difficult access. The fact that it was found in Roraima, along a federal highway, only reinforces the thesis that we know very little our biodiversity. The first time I saw Barcella odora was an epic get to where the palm tree growing naturally. Harri Lorenzi and colleagues were in mid-2004 preprando us to throw the book " Brazilian and Exotic Palm Trees Grown "when they decided to go to Barcelos to take the pictures of this palm to illustrate your description for that book. After losing a days and hundreds of gallons of gasoline for a dishonest boatmen (who, coincidentally, was a candidate for councilor at PT Barcelos), the trip could be completed with the help of a server Funasa, which led us to where the palm tree could be found. Were more than eight hours of travel to get there - including some hours we are drifting with engine trouble. The cost of the photos were published was high, very high ... We arrived at the site of the palm around 17 hours, almost no light to take the pictures. Disembarked, with water covering the feet, about 10 minutes we were at the site and return. Arrived in Barcelos after 9 o'clock at night. It was amazing to see that the boatman had knowledge of the intricacies and paths between the islands of the Rio Negro. Not for anyone. In fact, the differences between navigating those bands, the paradise of wetlands, and Acre are striking. There were hours and hours of travel and no more than 2-3 houses on land sighted from the speedboat. Enough to give ransom for fear ... there must be days." (Dr. Harri Lorenzi, Instituto Plantarum)