Archontophoenix purpurea is endemic to northern Queensland, Australia where 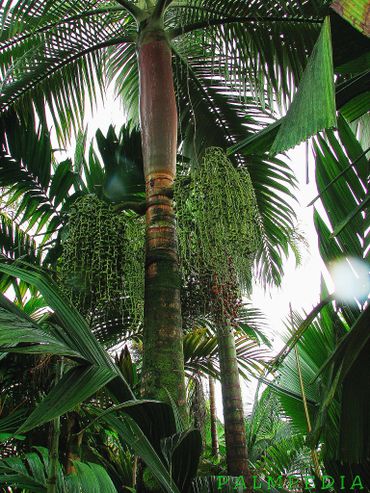 Hawaii.
it grows in swamps and rain-forests to 1200 m in elevation. In habitat, it grows in well-drained, humus-laden soils and tolerates periodic flooding.

Archontophoenix purpurea is a stunning relative of the more common King Palm (Archontophoenix cunninghamiana). Its common name, "Mount Lewis" is derived from the fact that its natural habitat is limited to the Mount Lewis area of northeast Queensland, Australia, where it grows in montane rainforests at up to 1200m/3900' above sea level. Editing by edric.

The attractively ringed gray trunk grows to 25m/80' tall and up to 300mm/12" in diameter with a nice basal flare. The slightly recurved pinnate fronds have a fairly flat leaflet arrangement and grow to 4m/13' in length. Leaflets are anywhere from a bright mid green to dark green, varying with light exposure. The undersides of the leaves, like a King Palm, have small brown hairs, but unlike the King have a silvery underside . This species is easily distinguishable from other "Archies" by its long, purple, slightly bulbous crownshaft, which can be almost red immediately after an old leaf base has fallen or been removed.

Although still fairly rare in cultivation compared with the King Palm, A. purperea shows similar adaptability being suitable for a variety of climates ranging from tropical right through to some cool temperate. This adaptability, combined with its stunning features, should help to improve its popularity in cultivation, although it is somewhat slower growing than some of the other palms in the genus. Archontophoenix purpurea looks best grown in partial shade, but will handle full sun with an abundance of water and can even sit happily in fairly wet, poor draining soils. Whilst it will handle pot culture, its eventual size makes it unsuitable for most interior settings, although its relatively slow growth and ornamental features may be enough for some people to use it in a large greenhouse or conservatory during its early years. It will survive minor, short term frosts, but will require some protection in most cool temperate areas, which will obviously become a difficult proposition as the palm gets larger.

It is the slowest growing species in Archontophoenix.