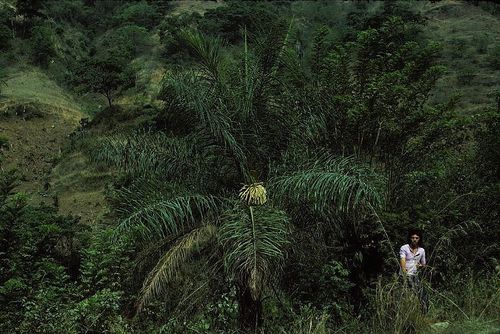 The seeds are a source of oil, and the leaves a source of fiber. The flowers are said to be pectoral.

This is a tillering palm, it exhibits saxophone style root growth (it has a heel), keep top third of heel above soil elevation!.

Although as many as 30 species of Acrocomia have been described, a recent study (A. Henderson et al. 1995) recognized only two, A. aculeata (Jacquin) Loddiges (including A. totai Martius) and A. hassleri (Barbosa Rodrigues) W. J. Hahn. I maintain A. aculeata and A. totai as two separate species, both of which are cultivated in Florida, where the latter species is naturalized . A general comparison of these two species was made by B . Peterson (1991) in which he noted that the eophyll of A. aculeata is 2-cleft and that of A. totai is undivided. He also found several subtle differences between these species when mature . For example, the trunk spines of A. totai are ca. 12--13 cm and those of A. aculeata are ca. 6--10 cm. Clearly, additional study is warranted to resolve the prickly systematic problems in this genus.